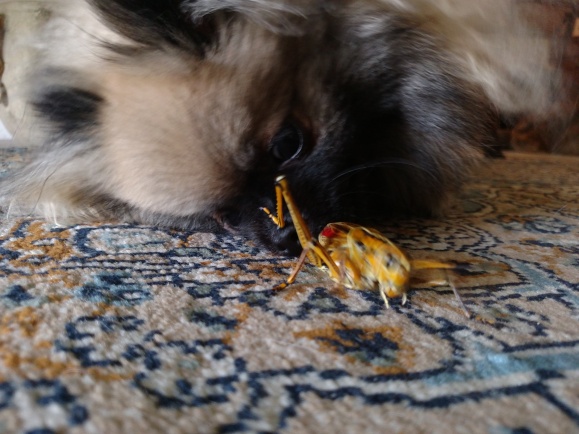 To back up; I have had a Pom for about fifteen years. She has been a great companion and is trained to my rules, quirks, and hand signals. Her nose has turned from black to grey, her tail often hangs down instead of resting over her hips, and I have to rub her shoulders in the mornings so she doesn’t limp.

I decided to buy a Pom puppy so the training and personality could be passed on. The new puppy, Zenzi, is now nine months old, and has mastered most of Koko’s training. My timing was perfect. I have noticed that Koko would often sit in the floor and stare at me. She watched my face, what I was doing, and my hand gestures. After a few tests, I discovered that Koko is losing her hearing. When Zenzi barks at the door, Koko chimes in with her and doesn’t really know why. Zenzi quits barking when I address the problem, but Koko continues until she makes optical recognition with me.

On the good side, having Zenzi in the house, has encouraged Koko to become more active. She runs and plays now, almost as active as Zenzi. When she becomes tired, she goes to a large piece of pottery, (the toybox), picks out something she thinks I will like, and brings it to me. It’s payment for what we call a butt-lift. I pick her up and she lays against my leg on the couch.

The latest challenge, is a very large red-tailed-hawk. I saw it swoop across Zenzi’s six-pound body and land on a branch, ten feet in front of her. I ran toward it, and threw a piece of wood at it. It just sat and looked at me and then at Zenzi. I grabbed the garden hose and blasted the bird with water. Each time it comes back I squirt it again. Birds don’t fly well with wet feathers. I bought the big plastic owls with the rotating heads, the mylar holographic tape, fishing line, and old CD’s that rotate and reflect the sun. The birds here are just too smart.

My neighbor informed me that the mother had a young one in a nest in their yard, and sure enough, she was teaching the baby how to hunt Pomeranians. They were both in my yard. They both got a shower. I was told that hawks return to the same place to nest each year, and we DO have many other large predatory birds here in Florida, so I went to level two. I am enclosing a large area outside of my sliding glass doors with insulated roof and screened in sides. I will leave the grass and small plants so the dogs can exit the doggy door while I work, and still have grass in a safe environment. Zenzi could live fifteen, or eighteen years. The expense doesn’t hurt so bad if I spread it over the years.

I have been working on, what I call, Trust Exercises. It involves letting her go with me outside of the fenced in yard, and stay with me. I am on a slow road that is lightly traveled and try to do this when everyone is home. She was doing so good that we went farther, around to the other side of the house. Today, I was working in the back yard and left the back garage door open. The overhead was open too, so Zenzi stealthily went through and across my neighbor’s lawn. As I worked in the back yard, I heard a small dog barking. No… Zenzi’s in the house. I saw her run into another fenced in back yard with a woman from the third house trying to catch her and rescue her. Zenzi was scared and had run into a fenced in corner. I started yelling for her, stooped down, and she ran, jumped in the air, and I caught her airborne. Many hours later, we did Trust, again. This time she was never more then ten from me at any time.

This site uses Akismet to reduce spam. Learn how your comment data is processed.